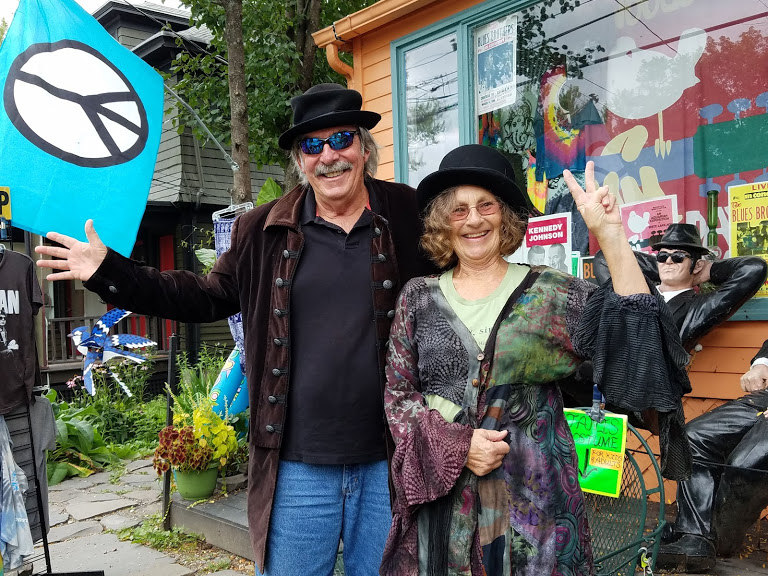 Missing Woodstock, that quintessential rock festival in the Catskills back in 1969, still leaves a hole in my soul. I should have been there. I’d been a student then at Florida State University in Tallahassee, partying hard but somehow managing to stay on track for graduation. I’d stopped wearing bras, grown my hair long, and lived in peasant dresses.

Political issues burned on my radar screen at that time, with racism and the anti-war movements most prominent. Tallahassee had an active Ku Klux Klan chapter, and I’d gone to an anti-racism rally and witnessed a hooded, white-robed mannequin burning in effigy. The image left an indelible, haunting impression on me.  I had also been to multiple anti-war demonstrations. But those undergraduate years were primarily about sex, drugs, and rock and roll. Exactly what Woodstock had been about.

Given that I’d missed the real thing, I seized upon the opportunity to visit Woodstock during an RV trip in 2018. With a population of 5823 per the 2010 census, the area surrounding the village looked like all the other upscale communities in upstate New York, with large manicured lawns and two- or three-story immaculately maintained homes. The village, however, remained a hippie Mecca, with street-lined vintage clothing shops, head shops, organic food markets, vegetarian restaurants, and, of course, souvenir shops filled with every tie-dyed item imaginable. There were even Janis Joplin and Blues Brothers clothes that folks could don for photos. It didn’t seem to matter that the real Woodstock festival had taken place in Bethel, New York, sixty-seven miles away because stubborn town officials had refused to grant the necessary permits. Did those officials, in retrospect, rue their recalcitrance? Probably not. They were able to capitalize on the name without having had to deal with the mess left behind by over 400,000 festival goers, over half of them crashing the party without a ticket. When we visited, Woodstock appeared to have three different populations. First, there were the tourists, and we were almost all gray-haired seniors who looked solidly middle-class. I speculated that most of us old coots had wished we’d been there back in 1969. The second group, and this was the smallest, were the employees of the businesses, a group mixed in age and appearance. I suspected they privately laughed their asses off at the over-priced, worthless Woodstock trinkets we scooped up. And lastly, loitering in the little town square, sitting or sleeping under trees, or engaging in listless, flat conversation with each other, were the hippies themselves. While primarily a gray-haired group, there were some younger folks in the mix. Almost without exception, they looked dirty, sickly, and stoned out of their minds.

I looked at these hippies with a mixture of horror and relief. How could a half-century of time have passed them by? I saw rotten and missing teeth, even in some of the younger folks. Had methamphetamine replaced pot for these newcomers, or was it simply no money for dental care? I saw a guy who looked about seventy puking his guts out under a tree. His two companions sat in silence, not even reacting. I saw another old man standing with a beat-up bicycle laden with what appeared to be all his possessions, including a filthy sleeping bag secured with Bungie cords. He carried on an animated conversation of pure gibberish to an unseen audience. Schizophrenia, or dementia? Could he have fried too many brain cells with drugs? Or maybe he’d turned super-religious and now spoke in tongues.

Looking back, I’m thrilled to have gone to Woodstock in 2018, just one year before the planned 50th Anniversary Woodstock Festival. I didn’t think the town fathers, this time around, would balk at allowing the commemorative event within the Woodstock zip code. However, the village of Bethel beat them to the punch. The Bethel Center for the Arts was already in full-steam planning for the big celebration. Too bad, or maybe just as well, that both sets of organizers abandoned the notion of a fifty-year reunion several months before the anniversary date. The celebration, in which multiple bands and superstars signed and then cancelled contracts with promoters, dissolved into competitive chaos.

Back in the late sixties, I was a lost soul. I somehow managed to overcome my debauchery and find my way to a successful career. I still don’t understand how or why it happened, but I mustered enough conformity with mainstream values to stay out of trouble and have a good life.

I can only imagine where I might be today if I’d gone to Woodstock back in 1969. I shudder to think I might have ended up being one of those who never left, neither literally nor figuratively.

I can’t explain what pulled me through those turbulent times in the sixties and early seventies, but visiting Woodstock made me grateful for life’s tender mercies.