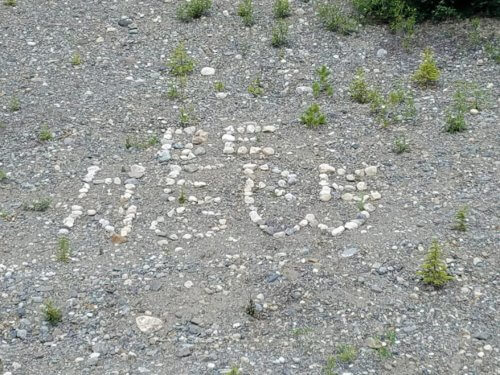 I once heard a story of an elderly nun who traveled the country in an old bus with Sisters from her Order. Every time the bus stopped, the old woman jumped out and scurried to find a rock, which she would either turn over or move a couple of inches. When asked about this odd behavior, she said, “I want to leave my mark, even if it’s just in a small way.”

The image stuck with me. Many of us want to leave marks. It explains why we end up in the helping professions, give money to the Red Cross, leave bags of canned goods by our mailboxes during holiday seasons. It may also explain why some of us write. I saw yet another way people leave marks as my husband and I drove the Alaskan Highway from Dawson City in the Yukon Territory into Chicken, Alaska. On the road, Michael generally drives while I make half-hearted attempts to navigate, read a book, or stare out the window in a vegetative trance.

It took four full days of Alaskan Highway travel for my brain to register what my eyes had been blindly seeing. People had left messages with rocks along the highway. They did this by pulling over, picking up rocks, and rearranging them to spell things on the embankments. Once I noticed these configurations, I saw them everywhere. “I’m seeing initials with either plus signs or hearts separating them,” I said.

“Hometown and State names.” Michael had slowed down, trying to read the messages as he drove. “Alma maters, college letters. Wow!”

Occasionally, we would see spray-painted rocks, the letters standing out for easy reading. The painted rocks looked garish to me.

Michael suddenly slammed on the brakes and pulled off on the median. “I’ve got to get a picture of that one.” He hopped out of the RV and grabbed his cell phone. I followed.

He leaned over to frame the photo for the closest shot possible. “Be here now,” the rocks read. “Very cool,” Michael said. “Baba Ram Dass.” Except we could no longer read the “now” part of the message. Our progress along the Alaskan Highway slowed considerably as Michael continued to stop for photographs. He wanted to make sure he got a representative sample of the messages. The idea appealed to me, in some ways. In other ways, not at all. “I need to think about it,” I said. “What would you want to say?”

“Not sure. Guess I’ll need to think about it, too.” We stopped at one point, got out of the RV, and walked up an embankment. I went so far as to pick up a rock. One rock. I could not make myself pick up a second one.

By the time we left The Yukon Territory, the geography changed and we no longer saw hand-sized rocks along the shoulders. I felt relief. Somehow, that raw and virginal landscape seemed too sacred to defile with a stupid rock arrangement. The Alaskan Highway had left a mark on me. I did not need to leave my mark on it.