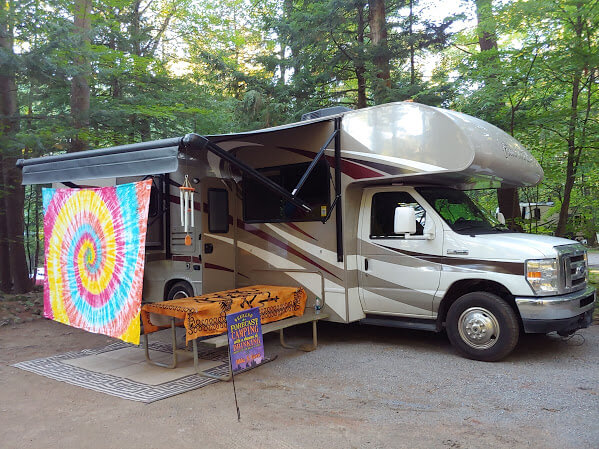 Despite trappings to the contrary, not everything about RVing is peace and love. This story is an example of RV disharmony. Yes, it can happen.

Who would have thought a GPS navigational system could bring two reasonably intelligent, even-tempered old coots to a near-divorce? My husband and I are RVers, and we depend on navigational systems when we travel. We expect GPS directions to be clear, efficient, and accurate, not something to argue about.

Our first RV navigational system was an expensive Rand McNally one favored by truckers. “Look what all it’ll do,” my excited husband had said. “It’ll route us around congested areas, tight corners, and low underpasses. It’ll tell us tunnel heights, alert us to accidents ahead. It does everything but drive the darned thing.”

“But it’s marked down twenty-five percent.” My spoiled husband almost always gets his way. That GPS purchase was no exception.

The Rand McNally GPS sat on the console of our Ford F-450 for the first year of RV travel. Neither Michael in the driver’s seat nor I riding shot-gun had any trouble reading the over-sized, seven-inch screen.

Then one day, my husband moved it to the windshield. “I can see it better here.”

“I can’t see the screen from that angle,” I said.

“But I’m the navigator. I’ll tell you where and when to turn,” I said.

“It’s for safety.” He refused to move the GPS back to the console.

I steamed in anger. I couldn’t believe he so discounted the value of a second pair of eyes on both the GPS and the road.

I remembered an old Garmin GPS stashed in my car’s glove compartment. I pulled it out, plugged it in, and voila—I was in business. I no longer needed to see that over-kill Rand McNally system.

Our arguments over routes skyrocketed. Our two GPS systems almost never agreed. I defended my little Garmin, arguing that our route should be the one for cars, not the route recommended for huge tractor-trailer rigs. Michael pointed out that I’d never once updated my Garmin in the ten years I’d owned it. I stubbornly refused to admit he might have a point.

We declared a truce, of sorts, which lasted until the Rand McNally GPS died during our second year of traveling. It just fizzled out. I sensed Michael felt personally affronted. He’d defended the system intensely, and now it had failed him. Not to be without his own GPS directions, my husband pulled out his cellphone, went to Google Maps, and continued his unilateral navigation without my input.

It took a harrowing, death-defying trip through the Catskill Mountains for my husband and me to reach GPS accord. We pulled out of a campground in upstate New York and headed north. Despite my Garmin screaming for three miles to make a U-turn, Michael persisted in following Google Maps rather than listening to me.

Our ascent continued. “Aren’t these roads getting awfully narrow?” I asked. “There’s no place to pull over if we meet another vehicle.”

The road narrowed even more. “What the hell does ‘limited use road’ mean? Did you see that sign?”

“Guess maybe they close the road in the winter.”

“Please turn around.” Panic had set in.

“Okay. Keep your eyes open for a spot.”

The twisting, turning, switch-back-filled one-lane road continued for eight miles and took us over an hour to navigate. We never found a place to turn around. Nor did we find a spot to pull over if we’d met a vehicle coming from the other direction.

Instead, we found hairpin turns on blind curves, drops of thousands of feet down cliffs with no guardrails, and patches of unpaved road with potholes the size of kitchen sinks.

By the time we got across our short-cut mountain pass, Michael’s knuckles had turned white and his brow beaded with sweat. I’d bitten two nails down to the quick, and it probably took thirty minutes for my pulse to return to normal. For the first time in two years, we found ourselves in accord that maybe we needed to replace that original commercial GPS designed for truckers.

We declared an armistice from our GPS battles. Now, until one of us pulls out a credit card and buys another Rand McNally super-duper, over-the-top GPS system, I can only hope we continue to get where we need to go without killing each other.