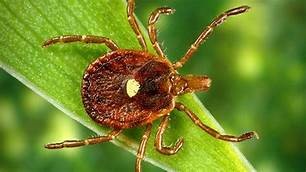 I don’t do well with stinging, biting insects. I react both emotionally and physiologically, and it’s not pretty. In our RV travels, we’ve encountered pesky bugs almost every place we’ve been. My husband Michael takes them in stride. But then, bugs rarely bite or sting him. They go after me like a hungry Pit Bull to a T-bone.

Michael wins the prize, however, for our scariest insect assault so far. We’d gone for a walk in the Lake Wissota State Park in Chippewa Falls, Wisconsin. The trail was wide, shaded, and followed the shoreline of the lake. We both wore shorts, and we don’t remember brushing up against bushes or foliage. My point is we did nothing to deserve what happened. Later that day, I noticed a streak of dried blood under Michael’s armpit, towards his back. I’d been sitting on the sofa, he’d been at the other end of the RV.

“What’s that under your arm?” I asked.

Michael walked over to the pantry mirror and turned to look at the spot I’d indicated. “Must have scratched myself.” He shrugged and pulled on his t-shirt.

The image nagged. The next morning, I said, “Let me look at that place under your arm again. Something’s bothering me about it.”

Michael pulled up his t-shirt.

“Oh my God. It’s a huge tick.” The thing freaked me out. It was fat, swollen—engorged on my husband’s blood. Disgusting. But I knew I needed to stay calm. “Let me find the tweezers. I think I can just yank it out, but I’d better check online to make sure.” I grabbed my iPad and made a quick Google search for tick removal.

“Jeez,” I said, tugging with the tweezers. “This thing’s really attached.” Pulling it off was more like a tug of war than a simple jerk. “Look at this.” I’d pulled the thing out and held it up for Michael to see. “He’s got a big chunk of your skin in his mouth. And look at him wiggle—he’s still alive.” I’d thought all my squeezing and tugging would have killed him, but it hadn’t.

“Get a baggie. Quick!” I said. “We need to take him to the doctor with us.” Not knowing at this point how doctors diagnosed Lyme Disease, I didn’t want to destroy evidence.

Meanwhile, blood oozed down Michael’s side. With the tick secured in a plastic bag, I grabbed the first aid kit, doused the area with hydrogen peroxide, applied Neosporin, and slapped on a Band-Aid. An hour later, we walked into an emergency clinic, our tick still very much alive and active inside the baggie. The doctor told us disturbing findings from a recent study of ticks in the Chippewa Falls area—ninety percent of them carried Lyme Disease. We left the clinic with a ten-day prescription for doxycycline, the recommended antibiotic, and orders to follow-up with a blood test six-weeks later. I assume the doctor dumped our tick in her garbage—we didn’t bring him back home.

We both got on the Internet when we got back from the clinic to learn more about Lyme’s Disease. The next morning, I screamed when I saw the tell-tale bull’s eye around the site of the bite. Thank goodness we’d gone to the doctor.

It took over three weeks for the assaulted site under Michael’s arm to heal. He didn’t talk about it, but I’m sure he worried about the damage that tick bite might be doing to his health. He faithfully took his antibiotics, not pleased that he was supposed to back off on the beer until he’d finished the medication.

Seven weeks and hundreds of miles later, Michael went to an emergency walk-in clinic in Hatfield, Pennsylvania, for blood work. The doctor called the next day and gave him a clean bill of health. We hadn’t realized until the phone call how anxious we’d both been for the past two months.

I still get hysterical over bug bites. I complain, and itch, and scratch, and talk ad nauseam about my discomforts. After Michael’s tick bite though, I feel guilty about my dramatic over-reactivity. But maybe I shouldn’t. He never hurt, itched, or felt a single bit of distress with his tick bite. Maybe next time I should hope for a tick rather than all the mosquitoes, black flies, and sand gnats that seem to always find me.