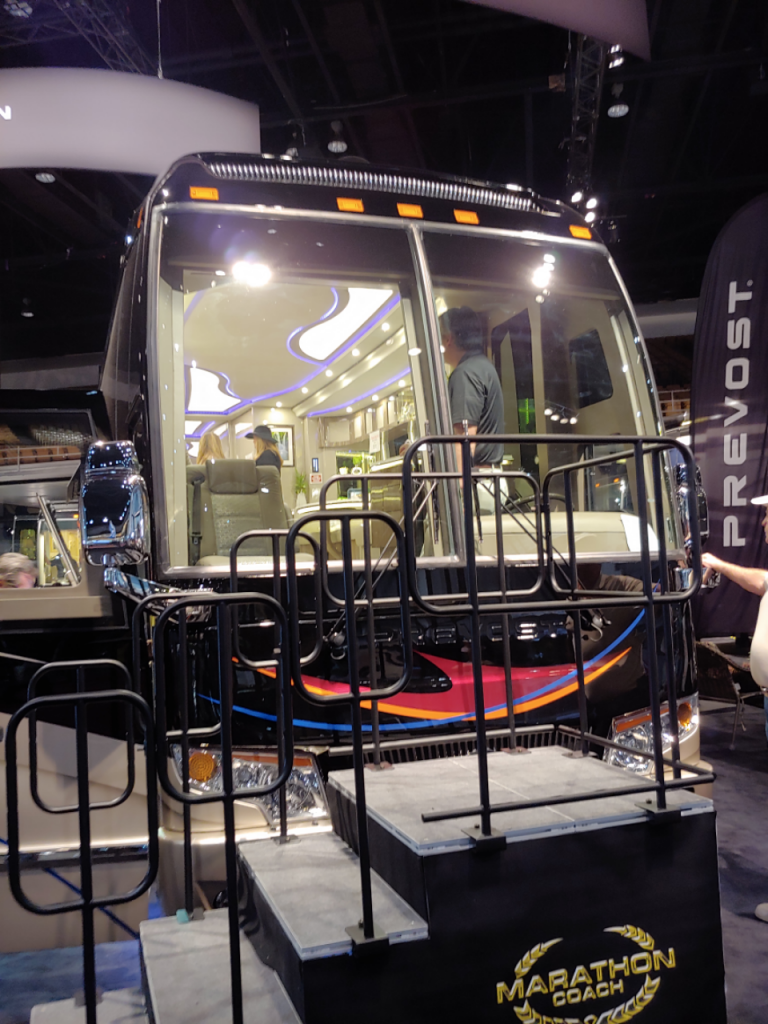 I’m thinking the RV Show at the Florida State Fairgrounds last January lived up to its advertising hype of being the largest RV show in the world. Vendors filled three huge halls with exhibits. Outside the exhibition halls, organizers had compressed thousands of RVs into rows that resembled chunks of chocolate in a Whitman’s Sampler, with barely room to walk between them. The rows formed city-block streets, with RVs as far as the eyes could see. Food and drink vendors appeared at intersections along the way. Courtesy golf carts and trams made routine pass-throughs, providing welcome relief for weary pedestrians.

This annual RV show attracts a variety of attendees—curious folks who’ve never stepped inside an RV on one end to decades-long full-timers on the other. It’s a pricey outing, with eight bucks to park, ten bucks to enter, and three bucks for a bottle of water. We paid seven bucks for a hamburger with a thin slice of tomato and a wisp of lettuce on a cold bun.

Vendors of every camping accessory and service imaginable manned the booths. We pushed through crowds as microphoned hawkers tried to interest folks in potato peelers, collapsible plastic storage containers, time-share campgrounds in Maine, and mud-collecting doormats. My husband really wanted a Texas Two Step Doormat, but fortunately, I was able to convince him $69.95 seemed a bit high. We looked longingly at a folding boat that compressed to a mere seven inches and could hook on an RV ladder. It was so easy to imagine ourselves out on a lake or river somewhere. Like most things at the show, if we had bought it that day, we could have saved a lot of money. But as I finally convinced my husband, we saved even more by not buying it at all. The RV Show wasn’t just about spending money though. We found multiple ways to win prizes, anything from throwing darts to spinning wheels to filling out entry forms for drawings. We left the show with a cupholder, a tote bag, several ballpoint pens, and vouchers for four free nights of camping in Florida. There were other ways to get free camping, and we stopped at several booths to chat with park owners about Workcamper opportunities. Their deals offered free camping spots in exchange for working twenty or thirty hours a week at low wages. I envisioned myself watering flowerbeds, pulling weeds, and planting baskets of trailing succulents. Michael fancied himself driving a golf cart to show new arrivals to their camping sites. Working in North Dakota or Minnesota in October during beet harvesting season had certainly never crossed our minds. We showed appropriate interest while chatting about beets but later decided twelve-hour days until the beets were all harvested might be a bit much for people our ages. In contrast, four months in an RV park in Valdez, Alaska, sounded pretty good. But later, I wondered how we’d spend our free time for four months when salmon fishing and mosquito swatting were about the only things to do up there.

Since we weren’t interested in buying a new RV, we didn’t bother looking at the thousands of RVs on display outside. We did take a few minutes inside the main exhibition hall to look at a couple of extremes. On the small end of the continuum we found the Ascape, an adorable little trailer just big enough to stand up and turn around in. The table lowered and converted to a queen-sized bed. It even had a six-gallon hot water heater. I’m not sure why one would even need that much hot water, since it lacked a bathroom and shower. Retailing at $22,999, the manufacturer was offering it for only $14,411 during the show. Someone could have just popped that little darling on his Visa card. I saved the most expensive of the RVs for last. After three hours of standing and walking, my motivation to ooh and aah had diminished to almost zero. However, I did walk up a platform and look through the front windshield of the Prevost Marathon, a luxury 45-ft. Class A Motorcoach that retailed for $2.4 million. It may have had a jacuzzi, a sauna, Bose speakers in the pillows, imported Italian marble countertops, who knows what. I was too tired to be impressed. Or maybe just too tired to take my shoes off to go inside. I understood that shoe thing though. If I’d been purchasing that floor model, I’d not want other people’s dirt on my floor. I’m thinking Prevost should have visited the Texas Two Step booth and bought a mat.

If you were one of the few unfortunate ones in Central Florida who missed the World’s Largest RV Show in 2019, don’t worry. Come the third weekend in January next year, you’ll get another chance. And I’m betting the show next year will be even bigger.