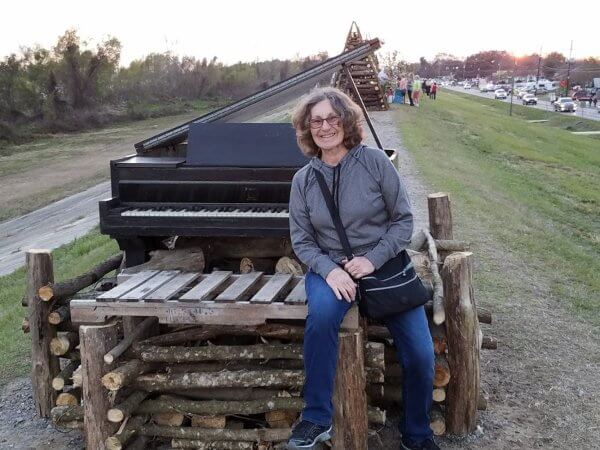 If you ever want to grab a bite to eat on Christmas Eve, go to Bulldogs Corner in Paulina, Louisiana. A couple of years ago my husband and I made the forty-mile trip north along the Mississippi River from New Orleans into the heart of Cajun country. We wanted to see the centuries-old tradition of lighting bonfires along the levee on Christmas Eve. Their purpose? To light the way for Papa Noel, the Cajun version of Santa Claus. I’ve heard an alternative explanation—to light the way to the nearest Catholic church for Midnight Mass—but I’m liking Papa Noel as the reason.

Folks in New Orleans had warned us of horrendous traffic along River Road, a route that parallels the Mississippi for hundreds of miles. We headed out from the city early and snagged a parking spot one block from the levee and not too far from the only business in sight—Bulldogs Corner. We could hear music from the Bulldogs’ jukebox a block away. Harleys, choppers, and an occasional Japanese bike lined the front of the bar in a precise, backed-in formation. Dozens of people loitered and milled around the building’s perimeters, most with a beer in one hand and a cigarette in the other. A handwritten sign out front advertised an all-you-can-eat buffet of Jambalaya, Gumbo, and other local food specialties for only $5 per person. “It’ll cost ten bucks to get in,” Michael said.

“That’s pretty steep for a dive.”

“Maybe, but where else are we going to find restrooms for the evening? Plus, we have to eat somewhere.”

As we neared the bar, we saw and heard a lot of activity out back. Lights from emergency vehicles flashed with urgency, and gawking bar patrons hooted and cheered with fervor. We walked to the rear, just in time to see paramedics hauling a stretcher to a waiting ambulance. Another medic leaned over the stretcher pressing blood-saturated gauze pads to the patient’s cheek. Cops had surrounded a second guy, whom they had in handcuffs, and were hauling him towards a cruiser.

We circled the bar and joined the long line out front to get inside. We could hear yelling and laughing, even above the blaring music. The atmosphere sounded pumped and charged with electricity.
“Fight broke out,” someone in line explained.

“They were arguing over a girl,” another said. “I know ‘em. She broke up with one of them ‘bout a week ago. She walked in with a new boyfriend—that’s when the fight broke out.”

Someone else added, “And that new dude bit him on the cheek. Can you believe that shit?”

Finally, we reached the door where we’d pay our cover and get our wristbands. Michael, ever the comedian, said to the cover collector. “I hear this is a good place to get a bite.” He somehow managed to keep a straight face. The bar employee didn’t crack a smile—I’m guessing he didn’t get the joke. Later in the evening, Michael tried the same line with the bartender, who said, “Yeah, the food’s pretty good in here.”

We drank beer, clinking our bottles to our good fortune of gaining admission before the place reached capacity. We decided to check out the unlit tree-looking, tepee-shaped structures along the levee in the daylight, then return for the Cajun buffet after the bonfires were lit.

The structures were huge—some as tall as two-story buildings—and almost every one reflected the same layering of logs and boards for good air flow and a long-lasting burn. Rumor was some of the fires would still be burning at daybreak, though most would be just a pile of glowing embers. Some of the displays reflected themes, maybe of religion, or hunting, or patriotism. We saw one structure with an old baby grand piano positioned on the edge.

“You’re not going to really burn up that piano, are you?” I asked.

“Couldn’t give that damned thing away. It’s missing half its strings. Figured this’d be a good way to say goodbye to ‘er.” Excitement mushroomed in the crowd as the sun set and the sky darkened. Dousing of the structures began around 6:30, with two or three men working together on each one, flinging can after can of liquid on the lower logs.

“Is that gasoline?” Michael asked.

The air along the levee went from smelling fresh and cold to smelling like an oil refinery before twenty-first century pollution restrictions.

I could have set my watch by the lighting of the fires. At seven o’clock sharp, the levee went from being almost completely black to a fairyland of blazing light, all in a matter of seconds. The fires whooshed upward in a driven fury the moment matches touched those kerosene-saturated logs.

I’d expected a cheer, or least some applause, from the hordes of people who now lined both sides of River Road. It’d been a dramatic, magical, mystical moment when those hundreds of bonfires erupted and transformed darkness to light, stillness to roaring energy, coldness to fiery heat. There was no piped-in music, no live news broadcasts on Jumbotrons, and no flashing neon lights. The ritual felt primal in its raw simplicity. Later I’d interpret the crowd’s silence as reverential respect for this ancient tradition.

We watched the bonfires in silence for over an hour. There was nothing to say. Eventually we headed back to Bulldogs Corner for restrooms, more beer, and food. The Cajun buffet for five bucks each was worth every penny. The next evening, we ate Christmas dinner at Irene’s, an upscale Italian restaurant in the French Quarter of New Orleans. We felt lucky to snag a last-minute reservation. Although the food at Irene’s was exquisite, with our final bill totaling almost $200, I’d choose a bite at that biker bar along River Road for a Christmas celebration any day of the week. Those bonfires continue to blaze in my mind.