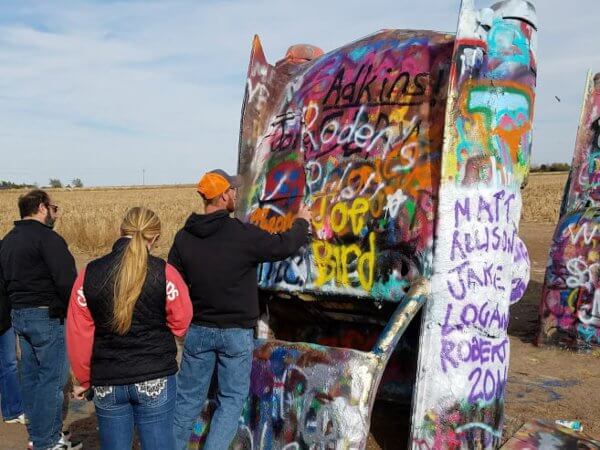 “Wait ‘til we get to Cadillac Ranch,” Michael said. “You’ll think you’re hallucinating.” Our RV bounced along a narrow backroad in the Texas Panhandle near Amarillo. We were trying to follow the famed Route 66 Highway.

My husband was right. Cadillac Ranch was surreal, and it blew my mind. This famous roadside attraction intrigued as none of the other funky, bizarre, and whimsical roadside attractions along Route 66 had done. Three artists from California, all part of a hippie-alternative architectural practice called The Ant Farm, created Cadillac Ranch in 1974. Amarillo millionaire Stanley Marsh 3 financed the project. Intended as a tribute to Cadillac tail fins, the artists collected ten junked-out Cadillacs, all built between 1949 and 1963, and buried them in chronological order, nose down, in a cow pasture.

The site became a mecca. Visitors came from all over the world to pay homage. In time, these gawking tourists stole every removable part, including the revered tail fins, to carry home as souvenirs. Only stripped-down and battered frames remained, and they changed daily as visitors swarmed with cans of Day-Glo paint. Route 66 preceded Interstate highways as a means of traveling from the Midwest to the West Coast. The Mother Road’s demise began in the mid-1950s when interstate construction began. By 1985, Texas had completed a long stretch of Interstate 40, two miles to the north, paralleling Route 66. To preserve Cadillac Ranch as a shrine, Marsh moved it in 1997 to a field abutting an I-40 frontage road, where travelers along the highway could see it.

We found parking along the frontage road and took the quarter-mile walk to join the long line of folks waiting to pass through the open gate. The atmosphere felt party-like. As we entered the pasture for our hike to the middle of the field, we noted the subtle humor of a No Trespassing sign and a padlock on the fence, not the gate. Later I read that Marsh and the artists had deliberately created what they hoped would become an interactive piece of art. Although Cadillac Ranch probably exceeded their expectations, I suspect the loss of those hallowed tail fins saddened the creators, at least a little bit.

Through the years, Marsh has periodically had the cars re-painted. Once, they became solid white for a television commercial. Another time, pink, in honor of his wife’s birthday. When one of the Ant Hill artists died, the cars ended up flat black, to express mourning. In 2012, painters covered the cars in rainbow colors to celebrate Gay Pride. With every change, the new colors lasted only a few hours before visitors again arrived with paint to leave their marks. Despite a howling wind and fifty-degree temperatures, we lingered in that desolate site for over an hour. Everyone did. We walked around and between cars, studied details, tried to decipher scrawled names and messages. Paying our respects to this vintage American symbol felt sacred. Almost religious.

Sadly, we’d not known we could leave graffiti, so we felt a little like idiots. Next time we’ll know. And we’ll take pictures the minute we finish painting, for nothing at Cadillac Ranch remains the same for very long.

There will be a next time. I have to prove to myself I hadn’t hallucinating the entire visit, as Michael had suggested I might think. While the Cadillac Ranch images might change constantly, they remain fixed and strong in my mind.