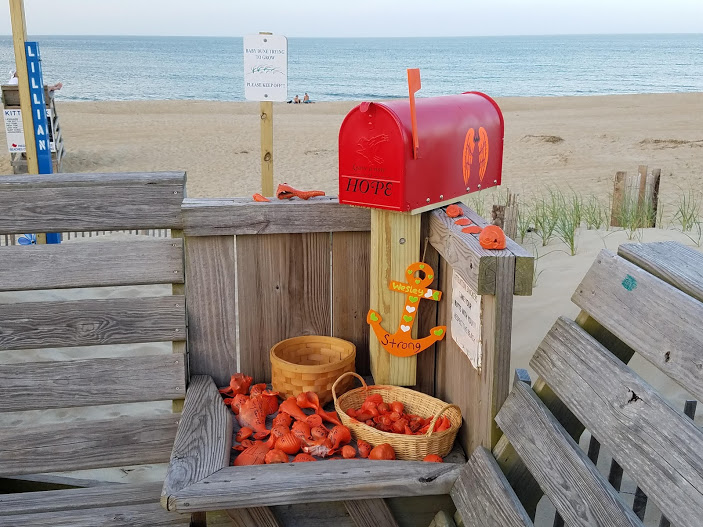 We forced ourselves to walk along the beach in Kitty Hawk, North Carolina. It felt compulsory since our RV park was just across Ocean Boulevard, with only sand dunes separating the road from the Atlantic Ocean. We were not beach people. Just to be able to say I’d done it, I removed my shoes and stepped into the water. “Yikes! What’d you think this water temperature is—fifty degrees?” “Don’t be ridiculous,” Michael said. “According to the news, it’s fifty-four. I can’t believe how you exaggerate everything.”

“Hahaha. Well, at least I know why no-one’s swimming.” Not only did the water feel freezing, the surf looked strong and scary.

A few days later we learned just how strong and scary those waves really were. It began when Michael and I walked over to the dunes at dusk one evening before turning in for the night. We wanted a final look at the Atlantic Ocean, a sight that never failed to create awe. We were surprised to see something new at our crossover spot—someone had nailed a red mailbox to the wooden overlook. It hadn’t been there that afternoon. That’s when we began to piece together the story from old newspapers, the internet, and conversations with locals.

The incident had happened on April 25, 2018, about a month before we arrived in Kitty Hawk. We both freaked out when we learned we’d probably walked along the exact spot where the accident had occurred. It may have even been where I ventured barefoot into the water’s edge. A New Hampshire mother and her four-year-old son, Wesley Belisle, had been walking ankle-deep along the water’s edge when a powerful, four to six-foot rogue wave knocked them down. A second wave followed and separated the mother and child. Forever. A rip tide had caught Wesley and ultimately deposited him thirty miles to the north at Carova Beach five days later.

The community of Kitty Hawk mobilized with an outpouring of support and sorrow. Private citizens combed the coastline long after the Coast Guard called off the official search. Residents created a huge heart out of seashells on the beach, filling the inside with balloons, teddy bears, flowers, and all sorts of gifts. Someone created a time capsule, filled it with collected notes, and threw it into the water. “Wow,” I’d said. “These stories are bringing tears to my eyes.”

“The story received national coverage. Who ever heard of such a crazy thing? It makes shark attacks and alligator bites seem like every-day occurrences.”

And now, exactly one month later, an anonymous member of the community had nailed this red mailbox to a platform on the beach, with notepaper and magic markers inside the box for visitors to write messages to Wesley and his parents. Orange had been Wesley’s favorite color, and the mailbox donor had painted seashells orange and arranged them at the mailbox’s base, creating a second option for folks wanting to leave messages.

Already, with the mailbox there for less than a day, folks had written dozens of messages in the notebooks. Michael left a note from us, expressing condolences.

“Wow,” I said a couple of days later. “That could’ve happened to me.” “What are you talking about?”

“A rogue wave. A riptide. I had my feet ankle-deep in that water. I could’ve been swept away just like Wesley and his mom. You could have lost me forever, right here in Kitty Hawk.”

“Oh, yeah? Probably if Wesley’s mother had heard a story like that, she’d have thought it ridiculous as well. But look what happened. Why’d they ever call it a rogue wave anyway? That doesn’t seem to fit.”

Later, I sat down with a thesaurus and, for the life of me, I couldn’t find a word that described that unexpected, ferocious, deadly wave any better than the word rogue.